For scheduled planetarium shows, see Current Events. If none appear, check back in a week or so.

The Halifax Planetarium showcases a vintage Spitz projector that is owned by the NS Museum of Natural History, housed and operated by Dalhousie University Department of Physics & Atmospheric Science, and operated by volunteers from the university and the Royal Astronomical Society of Canada—Halifax Centre. 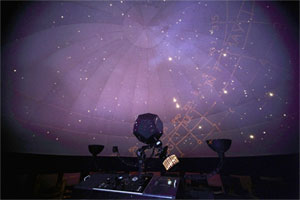 The heart of the Planetarium, a Spitz Model A-1 projector dating from the 1950s on indefinite loan from the NS Museum of Natural History, has been in its current location for well over 40 years.

Although the Halifax Planetarium is not as big as others in Canada, its size is ideal for small groups (up to 30) and allows for a close interaction between the operator and the audience.

The planetarium is housed at the Department of Physics and Atmospheric Science in the Sir James Dunn Building at Dalhousie University.

2009—The International Year of Astronomy—saw a major revitalization of shows at the Halifax Planetarium.  Thanks to many dedicated individuals, from many different groups, we now have a series of public shows.  These shows have been running at capacity, in some cases with a second show being added to accommodate the demand.

Please address all enquiries to the Planetarium via our contact form.